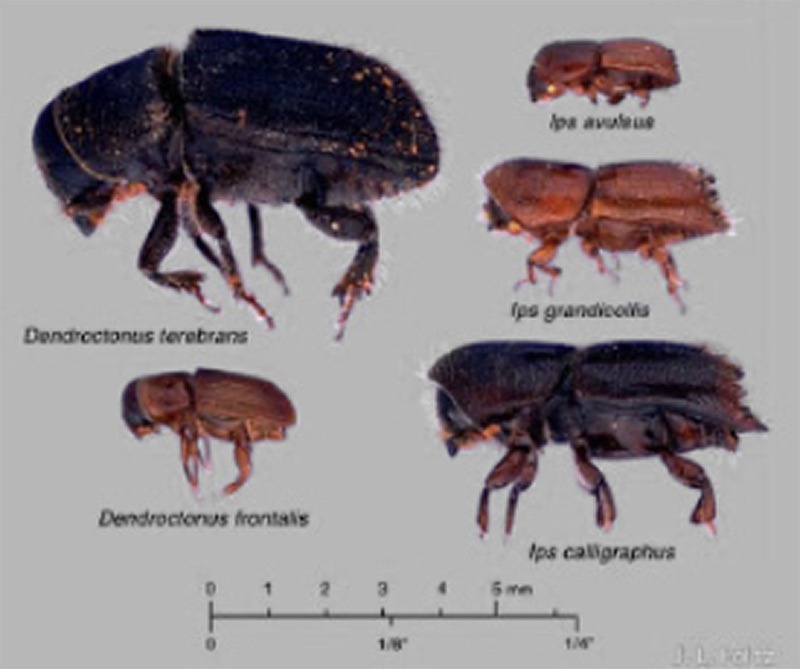 If you notice pine trees in your community are turning partially or totally brown, you may want to take a closer look. Saw-dust in the bark crevices or at the base of the tree, small round holes in the bark or visible sap accumulation are telltale signs pine bark beetles have taken up residence.

There are five species of pine bark beetles in Florida. All are dark brown or reddish and very tiny, measuring up to only a few millimeters in length. They burrow and feed in the inner bark of pine trees, creating a system of tunnels called “galleries” where they reproduce and lay eggs. Some also carry and feed on a blue fungus they bring into the tunnels with them. Both the tunnels and blue fungus disrupt the vascular system of trees, ultimately killing them.

Pine beetles are generally attracted to pines that are stressed or dying from age, lightning strikes, root injury, disease, soil compaction, drought, flooding or other stresses. Hurricanes are enormously stressful to trees and bark beetles often show up in the aftermath, hastening the decline of weakened pines.

Most pine beetles do not pose a great serious threat to healthy trees, however Southern Pine Beetles (SPBs to us) may attack healthy pines. Therefore, if SPBs are confirmed and there are high value pines near an infested area, protective treatment may be warranted. Cut-and-removal or burning is recommended to avoid SPB spread to adjacent living trees.

If dying pines are observed, contact Mainscape at 1-800-481-0096 for an evaluation with recommendations.